After a brew, there was only enough water left for this one brew, we set off up the hill and about an hour or so later we reached the ridge. From here we traversed westward along the ridge to where it formed a col with a very high pointed peak. The only way we could keep our height was to traverse around the right hand side, via a small track. In places the track became very thin with occasional drops of a hundred feet or more, falling away from the edge of the path. On reaching a ridge that ran down from the main peak on the northern side and we descended into the valley below, the valley being on the left the ridge and well traversed with maze fields.

In the bottom of the valley there was a small village at which we had to stop to fill up our water bottles. Seeing that we had to stop, we also decided to have a brew by the water hole. It was while we were having a brew that a local farmer came and asked us whether we would like to have lunch with him. As it turned out we had lunch, an evening meal and some booze plus a bed for the night in a new house he was building. (Note, Himachal Pradesh is a dry State and booze wise we are talking illegal India Moonshine) The farmer was very worldly and spoke very good English due to the fact that he had been an officer in the Indian Air Force. He had to leave the air force because at that time if you had tenanted farmers on your land for more than seven years they had the right to that land, or something like that, hence the reason he had to now farm the land. The Farmer also showed us two caves/rock shelters and said that in this area alone there were over a hundred or more such small caves. Although this sounded rather good at first. It turned out that the two rock shelters we had just seen were the largest know in the area.

We had a very enjoyable evening and turn in for the night rather exhausted.

The weather was very warm and sunny all day. 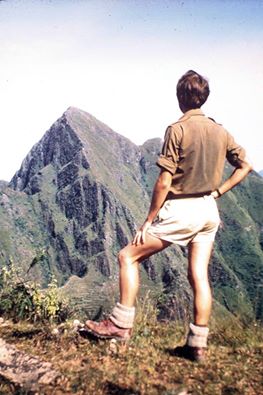