We went into Ghent to meet members of the staff of Du-Pont and also to pick up their Dacron filled sleeping bags which they donated to the expedition. The meal they gave us was fantastic plus a promise of about £50 if we send them some black and white photographs of their sleeping bags back from the Himalayas before the 26th October. The route was changed owing to suggestions made by members of the Du-Pont staff. This they said would be the easier of the two because we would get on the Autobahn several miles earlier than our planned point.

Just when everything was going OK the officials at the German Border Post near Aachen said that we would not be able to pass through their country unless we had special permission plus that fact that they reckoned that our bus was too high for their bridges on the Autobahn. Rod and Jim are therefore going into Aachen tomorrow to sort things out. There may be a good chance that we will have to take the roof off the bus but we will decide on that in the morning.

The bridges on the route today were close but OK; the only two near misses or near hits were high power lines over level crossings.
The weather was again hot and sunny.

Below the route so far, getting our sleeping bags from Du-Pont and the B&W pic we eventually sent to claim out £50. 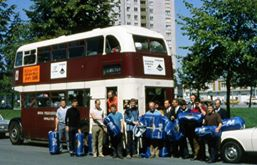 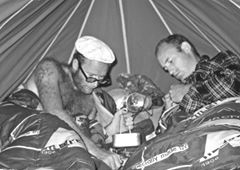