Our early start was put back somewhat when we found that some lads from England, who were camped out in the same garage foyer, had just returned from the Hindu Kush. To our relief they had the same trouble as we are experiencing with the tyres at the moment. They informed us, much to our relief that they had purchased several good second hand tyres for about £6 each in Iran.

After a short but well needed wash and all the water tubes filled we started on our way about 6-o-clock.

At approximately 09:15hrs we stopped for breakfast. As it turned out we had stopped near a small stream which although it was rather dirty provided everyone with the chance to take a good wash top and bottom! While Ian, Colin and myself were in the water some local women came to wash their clothes etc. Much to their surprise as well as ours!

Before and after our washing session we searched the countryside for, fruit and vegetables etc. and after a couple of hours we ended up with a large assortment of fruit.

About 13:15hrs we made up a little more ground for about 3/4 hour and then stopped for tea. Tea constituted curry and a marrow which we borrowed from one of the fields and finished off with stewed apples and black barriers in milk.

About 6-o-clock we set out to get as near to the Bulgarian border as possible. We stopped for the night on the top of the Dragoman Pass (2628ft). The gorge leading up to the pass was absolutely spectacular.

Note later some doubt arose as to whether we had camped on the Dragoman Pass or not? 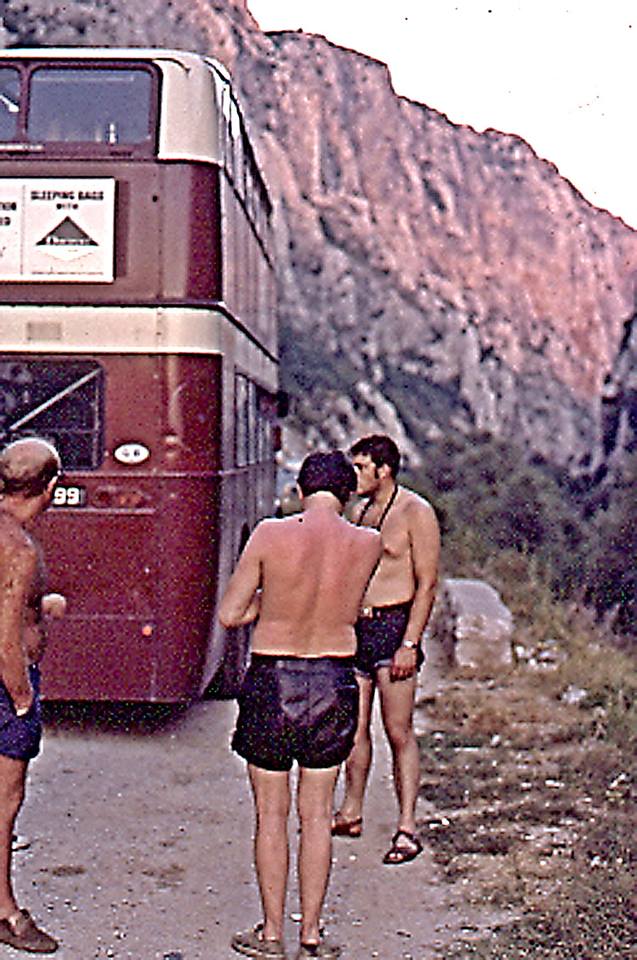