Broken Rib Cave was found in early 2013 by John Southworth and quickly dug into a small chamber.  From this a narrow section was opened up and dropped into a larger, loose chamber, dropping down and back under the entrance.

Whilst this was beng dug Tom Howard discovered Broken Rib Pot, a draughting shaft covered with a slab very close by (markings on the wall and a used lightstick suggest that this had been found previously), which was pushed into a short cave in very loose boulders. John’s first trip into this resulted in a cracked rib. The cave is very unstable in parts, an entrance collapse on one trip could have had serious consequences for anyone in at the base of the climb.

Both caves draught strongly, but oddly – one may draught in and one out, both in, or both out. A smoke test showed the two are connected. The strength of the draught suggests more work may be repaid, but neither are easy or safe to dig.

They gained more significance following the Large Pot Eastern Front extension discovery later in the year (see Area maps below), showing that the end of this  passage is fairly close to the dig, less than 100 metres away.

Broken Rib Pot is twenty metres around the corner on the left of the shafts, at more or less the same height.

At the base of the entrance shaft as well as on a previous dig a large number of bones were found including horse, cow, red deer, reindeer, pig, auroch, wild pig, dog and human. 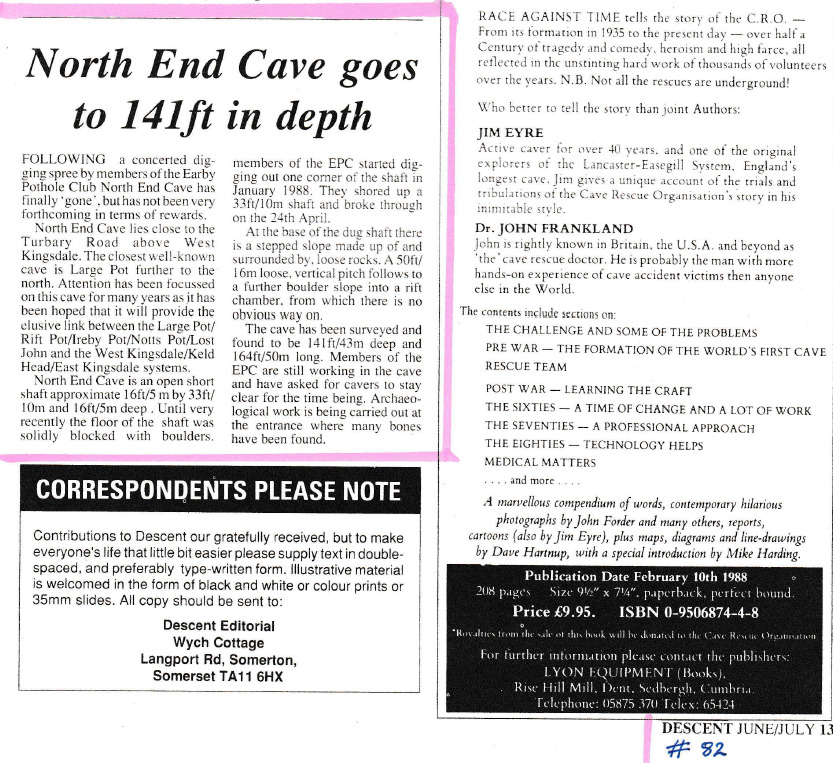 I’m assured a full write up is to follow!

Compiled by Patrick Warren the Misty Mountain Mud Mining Corporation (MMMMC) have produced an excellent PDF showing the surface map overlaid with the Ireby, Rift, Large , Low Douk, Marble Steps and Keld Head surveys, which shows how close both North End and Broken Rib are to the Eastern Front.

Map is reproduced by permission of Ordnance Survey on behalf of HMSO. © Crown Copyright. All rights reserved.